R4W has been working all year with four talented creators from across the country as part of our 2019 Women From the Future Commissioning Project. Catherine Falkner (Vancouver), Liz Solo (Toronto), Tracey Waddleton (Montreal) and Renée Hackett (St. John’s) have been developing new scripts in preparation for production with R4W in 2020. The artists have been meeting regularly via Skype to share their ideas and processes.

Collaborating online is an effective way to share work and feedback during the creative process. R4W have developed many projects this way and next month we’ll be sharing some of our cross-Canada conversations on social media. Stay tuned for dates and links. Here’s are short descriptions of these fresh new scripts, with a little about what to expect when we produce in 2020. 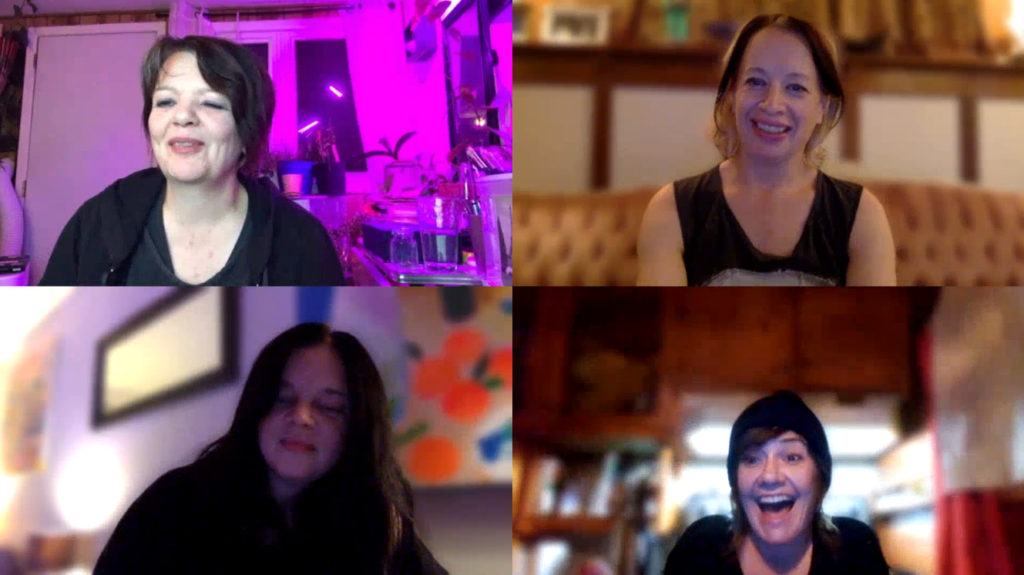 The Island – by Liz Solo

A being manifests in Virtual Reality as a blank avatar standing on a bare and deserted island. They have no memory of how they got there. As they slowly pull “artifacts” from the sand of the island, they unravel clues to their identity. The artifacts inform how they build their environment and construct their avatar. Part performance art, part choreography, part sci-fi tale, The Island is a hybrid reality performance that happens simultaneously in Virtual Reality space and on the live stage.

Love in Automation – a Play by Tracey Waddelton

In a near-future society where women have gained equal rights, technology has isolated humans and heterosexual relationships are the exception not the rule, June’s attempts to engage with the opposite sex prove ineffective. When a random encounter with Charles, a polite courier delivery robot, ignites feelings of love, June decides to make her move, setting off a disastrous chain of events that could lead to her downfall. Part comedic love story, part technological horror show, Love in Automation is a study of the endurance of misogyny in a post-woke, post-AI world.

Genevieve explores one woman’s bond with her Grandmother. In Genevieve a woman struggles to put away her Grandmother’s robe. What happens if she packs it away for good? Does that mean her grandmother, and one day she herself, will disappear? A moving story about two women, born two generations apart but imbued with the same spirit. Genevieve examines how the availability of choice plays a monumental role in determining the direction of a woman’s life. Using music, film, choreographed movement, and projected images, Genevieve is a poignant homage to the resilience of family connections and the power of choice.

The Octopus Trap, By Catherine Falkner

When grief takes hold what happens? What happens to us? What happens to our hearts? Broken heart syndrome, or Takotsubo, was first described in Japan in 1990. It is named after an octopus trap (“tako-tsubo”). In Broken Heart Syndrome the heart enlarges as a physical response to grief until the left ventricle resembles a fishing pot used for catching octopus. Follow Lufu, the broken hearted, as she explores the universe and finds her way through a series of strange, life altering events. Although Lufu thinks she is alone she is not. The Universe is there, lighting her path.

Women From the Future is made possible thanks to the support of the Canada Council for the Arts and the Black Bag Media Collective.